A leading journalist, Seumas O’Kelly was also widely known for his short stories, poems, essays, plays and novels. Our exhibition marking the centenary of his death continues until 28th February 2019.

Roughly a century after Laurentius copied his martyrology, two

martyrologies were produced in the monastery of Tallaght. The first,

known as the Martyrology of Tallaght, is an adaptation of an

abbreviated version of the Martyrologium Hieronymianum. Exactly by

what route the Hieronymianum arrived in Ireland is disputed, as is its

exact date of composition. We know from the second martyrology that

early ninth century, but additions  were made to the text as late as the

from both the ‘long’ and ‘abbreviated’ branches of the transmission –

generating many duplicates – and added many Irish names. The lists

Want to know more? Go to www.martrae.net for a full bibliography.

This report was sent by Fr Tomás King, Columban coordinator in Pakistan. Father Thomas O’Hanlon’s family nickname was ‘Tommy’. Shortly after Father Tommy arrived in Pakistan in 1982 an old man gave him the name ‘Tanvir’, ‘Enlightened One’, and that is the name by which he is best known in Pakistan. 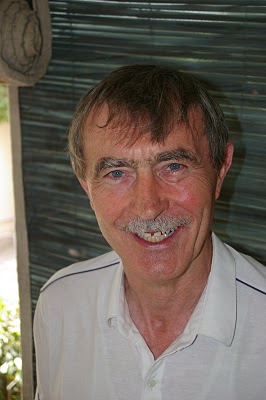 Fr Tanvir O' Hanlon was laid to rest in St Columban's Parish, Greentown, Lahore, on Thursday, 10 June, after the Funeral Mass in Sacred Heart, Cathedral, Lahore. He lies beside Fr Pat McCaffrey who was laid to rest three weeks previously to the day. 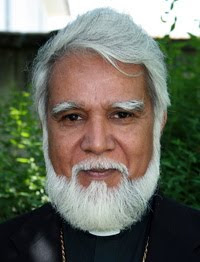 Bishop Joseph Coutts of Faisalabad
The main celebrant was Bishop Joseph Coutts of Faisalabad Diocese, a long time friend of Tanvir and the Columbans. Two of Tanvir’s siblings traveled to Lahore for the funeral: Ned from his home place in Tarbert, County Kerry, Ireland, and Michael who is based in England. They managed to secure visas quickly through the help of Fr Pat Raleigh. (Fr Raleigh is Columban Vice-Director in Ireland and went with the first group of Columbans to Pakistan in 1979 after serving for eleven years in the Philippines).
It was a moving ceremony that was a fitting celebration of Tanvir's life and his passion for justice which evolved and integrated into a passion and care for all of Creation. At the introduction to the Mass, Gloria Canama described the life, faith and missionary journey of Tanvir. (Gloria Canama, from Tangub City, Misamis Occidental, Philippines, is a Columban lay missionary who has been in Pakistan since 1990). The homily was given by Fr Tomás King.
The gifts and symbols brought up in the offertory celebrated his life and mission in Ireland, Philippines and Pakistan. 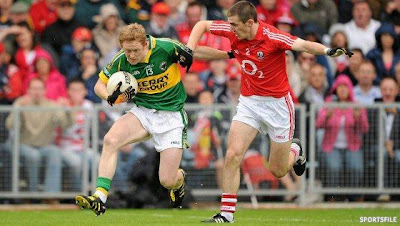 Kerry jersey on the left. Photo taken 13 June 2010 as Kerry deafeated archrivals Cork by one point in a Munster Championship replay.
Kerry football jersey: Tanvir first expressed his passion for life as a footballer. He was captain of the Kerry minor team that won the All-Ireland Minor (Under-18) Football Championship in 1963. His football jersey symbolizes his gifts and talents and his ability to work in a team. 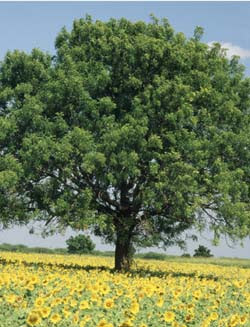 Neem tree
Neem Tree and Candle: These symbols represent healing, life and light. Tanvir was a healing and life giving presence in our midst. 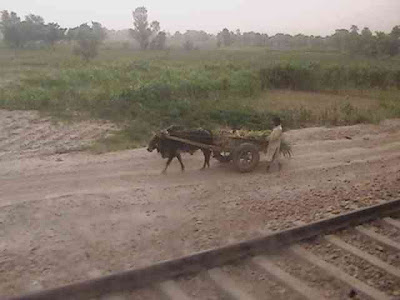 Rural scene, Pakistan
Soil represents the places where Tanvir spread the good news through his life. We have gathered this soil from Mariamabad, Shekhupura, Shadbagh, Green town and brick kiln. This soil represents his entire life with the earth community, especially in Pakistan. We pray that the seeds he planted in this soil will flourish. The soil from his home place was thrown on his coffin while the soil from the places he worked was used by his brothers to plant the neem tree at the graveside. 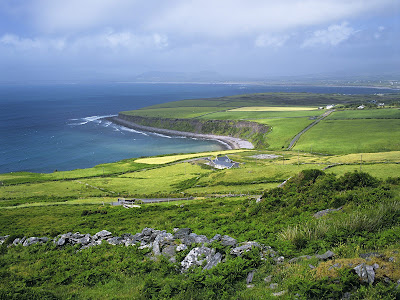 Globe: Tanvir's life reached far and wide. In the Philippines he was involved in building Basic Christian Communities. Here in Pakistan he reached out bringing new hope to the lives of many. 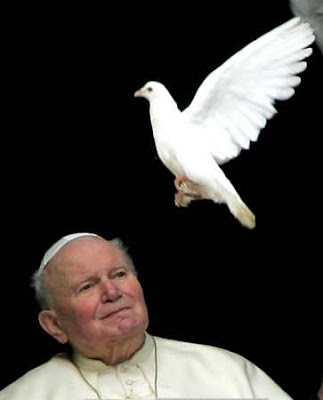 Cage and Dove: Justice, Peace and Integrity of Creation were the passion of his life. He worked tirelessly for justice especially for those on the margins of society, brick kiln, women and sanitary workers. The cage was opened and the bird freed after the Eucharistic celebration. 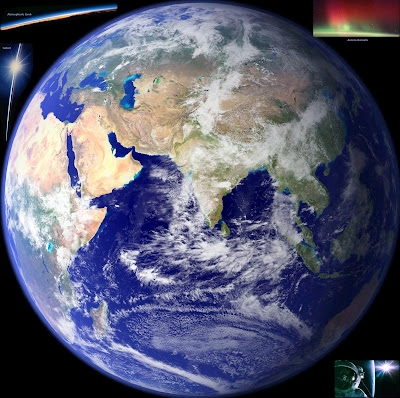 Earth from spcae with Pakistan in centre
Earth Community Banner: Earth is our home and all the lives that live on her are our cosmic family. We are just one tiny species of this family. The love, care and respect for creation were visible through his words and actions. It was his belief that we are from this universe and will return to this universe, so we need to take responsibility for loving, caring and respecting the universe. 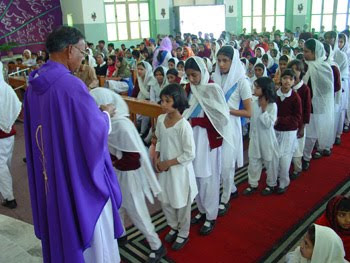 Celebration of Mass in Pakistan
Bread and Wine are the symbols of God's goodness, which earth has given us and human hands have made. Tanvir offered his life and work to God.
After Holy Communion items of significance from Tanvir's life in Pakistan were presented to his brothers by Fr Joe Joyce and Fr Robert MaCulloch, including his breviary, a Pakistani stole and the banner that embodied the Earth Community. Michael spoke on behalf of the family who thanked the people of Pakistan for taking Tanvir to their heart. 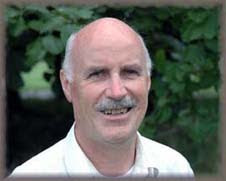 Fr Tommy Murphy, Columban Superior General
Fr Tommy Murphy (Columban Superior General) also spoke words of thanks for all the people who expressed their support, in recent days and weeks, to the Columbans in Pakistan who had, in Fr Pat McCaffrey and Father Tanvir, suffered the loss of two committed and faithful conferees in a short space of time. He also said it was a privilege for the Society of St Columban to be on mission in Pakistan and it was committed to continue to be so.


When Tanvir’s coffin arrived at the St Columban’s parish centre there were many people waiting to pay their respects. People queued up for the ‘Last Look’ after which prayers were said. Fr Robert McCulloch led the prayers at the graveside.

Darkness had fallen by the time burial was complete. The grave was covered with rose petals and flowers. Candles were lit and incense sticks lit. As people stood in silence in the light of the candles, it felt surreal, just unbelievable that in the space of 21 days, that two close friends; two stalwart, passionate and committed Columban missionaries, were laid to rest side by side in the soil of the ‘land of the pure.’ Two separate deaths, but in many ways one intense moment of grief.

In the words of W. B. Yeats: things have ‘All changed, changed utterly: a terrible beauty is born.’

May they rest in peace.

Here are some photos of Cork Folklore Project’s events and presentations over Heritage week.

TIME: Daylight Saving officially ende at 2am on Sunday 28 October, when the clocks wenr back to 1am.

The conflicts known as the Hundred Years’ War had been going on for seventy-five years by 1412. All told, it’s estimated that 3.5 million people died in the battles between Britain and France.

Surely, people wondered if peace would ever return. The Lord sent an unlikely leader: a slip of a French peasant girl named Joan who knew only the rudiments of prayer, and could not read nor write.

MPs voted by 208 to 123 to approve the Ten Minute Rule Motion proposed by Labour MP Diana Johnson. The motion would remove most legal restrictions on abortion in England and Wales, and impose a similar regime on Northern Ireland, which currently maintains strong right-to-life laws.

We all know the story of how Mary appeared to Bernadette, a simple girl of fourteen, at Lourdes. But what sometimes gets lost in the story is Bernadette’s strong faith. Her statements were challenged over and over again by Church officials and local authorities who attempted to catch her in lies and contradictions.

The Gosnell case serves as an indictment of not only the abortion industry, but also of oversight agencies that too often turn a blind eye to abortion.

Fr. Frank Pavone of Priests for Life shares his column that was published on Newsmax.com regarding how the opponents of Justice Kavanaugh undermined their own claim to help sexual assault victims, and how opposition to him was fuelled by the abortion issue.

Ana Maria fail in her mission.

Had she said that she shared her story to encourage all Senators, and the wider public, to be more sensitive to women who are victimized in this way, that would have been honorable, and she could have claimed some measure of success. She got a pulpit, a temporary spotlight, to get her message across,